The store will not work correctly in the case when cookies are disabled.

What is Harris Tweed? Where does it comes from? Here’s the story of how it has become one of the most well-known fabrics.

How did it all begin?

Harris Tweed is the only fabric in the world to hold its own Act of Parliament (UK statutory act since 1993) which probably makes it a unique fabric in the world. The main pillars of the act are that Harris Tweed is handwoven on the Outer Hebrides, at the home of the weaver, using virgin wool that is dyed and spun on the islands. The Act ensures that all cloth stamped with the Harris Tweed Orb symbol complies with this definition. 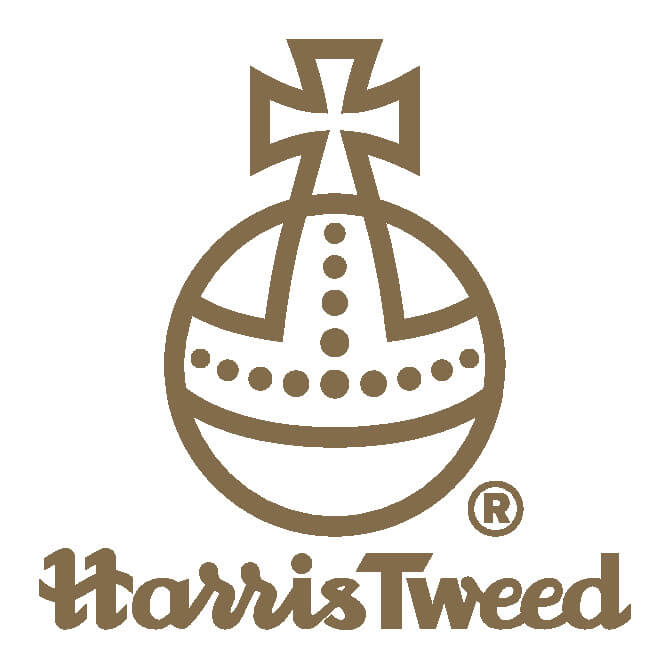 Harris Tweed Hebrides operate a vertically integrated mill where they receive pure virgin wool, mostly from the Cheviot breed of sheep. They then dye, card and spin this wool into durable yarn that is saturated with colour and spun to the perfect strength before being set onto a warping frame. This skilled process is both complex and painstakingly long with the resulting beam of yarn—1416 threads in total—being sent out to one of 160 independent weavers across the islands.

The Clo Mor (Gaelic for Big Cloth) was initially made for function rather than fashion. It had to be strong and durable, to withstand the aggressive winds that swept in off the Atlantic Ocean, but crafted in order that it would drape well too. The cloth was woven on traditional looms and natural dyes would be distilled using crottle (common rock lichen - usually gold or rust), lichen and summer flowers from the machair landscape.

In the 19th century Harris Tweed was used for both furnishings and apparel, but it became a popular country sporting attire after the local landlady, Countess Dunmore, started trading the robust characterful cloth with her aristocratic friends on the mainland. It was soon adopted as attire fit for the urban landscape where the rich grey and blue yarns fitted perfectly with the old mantra of ‘no brown in town’.

The Long March of Decline

Harris Tweed had been in slow and manageable decline since the peak production years of the 1960s but that decline was sharpened by the advent of cheaper synthetic mixed wools and abundant cotton in the 1980s. In a world where flashy style was prioritised over durable substance, quality fabric was always going to be usurped. The industry had a bleak future as the twenty-first century approached.

In 2003 Donald John Mackay received a significant order from Nike demonstrating that the Big Cloth still carried both relevance and allure. Four years later Brian Wilson, former UK energy minister, got together with Ian Angus Mackenzie and businessman Ian Taylor and reopened the derelict Shawbost Mill as Harris Tweed Hebrides. The mission was to revive the industry with archive patterns, new designs and fresh ways of communicating the brand.

How did it become ‘cool’ again; what was the spark that made fashion houses crave this heritage thread. There was no immediate Phoenix from the flame, rather an incremental comeback. An eclectic mixture of iconic clients came back to Harris Tweed, using the cloth in stylish and imaginative ways. These included names such as Dries Van Noten, Celine & Maison Margiela.

There were significant celebrity endorsements too, including Madonna in her country chic stage and of course the iconic blazer worn by Matt Smith as Dr Who. It was a new twist on an old yarn and the future looked more promising.

The Harris Tweed Authority has invested heavily in maintaining the skills needed for weaving, instigating courses both on the Island and satellite courses at colleges on the Scottish mainland. There remains a strong mentor to mentee culture on the islands, and so long as the outlook is positive for the industry then many more generations of islanders will continue to weave the iconic cloth.

The primary remit of the Harris Tweed Authority is to promote and maintain the authenticity, standard and reputation of the world-famous Harris Tweed cloth. Corollary to this is that the industry is protected for the future generations of The Islanders.

A New Twist on an Old Yarn

The Gaelic word Dualchas, which can be loosely translated into; all parts of the community working together in harmony for the better of all, perfectly sums up Harris Tweed. The industry is more than just a fabric; it is a product that is made with craft and care by people who value what they are creating. That Harris Tweed is made in such a remote beautiful landscape with its own culture only adds to its allure. Anyone who invests in Harris Tweed supports this way of life and will have a product that is the sum-total of a unique set of skills, culture and craft.

Explore our range of exclusive Harris Tweed garments and accessories. These items are the result of a close partnership between Walker Slater, Harris Tweed and prestigious organisations; the Scottish Rugby Union, the Ryder Cup, the Scottish Football Association and the Royal Edinburgh Military Tattoo. For well over a century, Harris Tweed has been woven with unmatched skill and reverence in the Outer Hebrides. The Harris Tweed Act of 1993 ensures that no part of the process; the dyeing, blending, spinning or weaving; takes place anywhere else. It’s a cloth with a rich heritage, and has a depth and beauty that cannot be replicated. We are delighted to work with a cloth of such significance, and have worked closely with the mills and weavers in the Outer Hebrides to design unique and exclusive fabrics that are used in our signature styles. Here you’ll find suiting options boasting contemporary and clean silhouettes in a range of our exclusive partnership Harris Tweeds, along with accessories to top off any outfit.